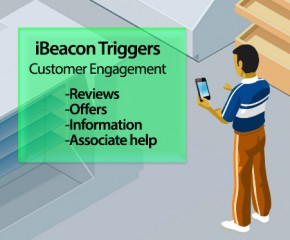 The Apple iOS 7 release in June also incorporated a hidden gem that not a lot of people knew much about called iBeacon. In fact, the specs themselves have yet to be completely fleshed out to the public even months after the launch. Apple has even announced that they have deployed iBeacon in 254 of their stores. Although it has not been made clear as to exactly what they will be using it for aside from “shopper tracking”, once the iBeacon infrastructure is in place, the opportunities are quite broad.

Before getting into the details of how iBeacon could help businesses, it would be helpful to first look at the technology behind it, Bluetooth Low Energy (BLE).

The core technology itself is not something new, Bluetooth has been around since about 1994 invented as an alternative to the standard RS-232 cable that most of us (of a certain age) will recall from PCs throughout the 90′s and into the early 2000′s. The wireless radio transmissions were designed to connect devices at short distances for streaming data. For many of these devices such as headsets, basic printing, and small networks, the pairing requirements, lower speed and power consumption of early Bluetooth did not present a significant challenge. In fact, for what these devices do for a living, the standard Bluetooth profile works just fine and is even used in some of these devices today. Still, the work to advance Bluetooth technology persisted which has now taken us to version 4.0 of Bluetooth, where we are today.

This is not intended as a deep dive technical article, we will focus more on how this will be used in business. The basics are as follows; BLE is a subset of the Bluetooth 4.0 standard. It is an entirely new protocol stack and it isn’t backward compatible. This protocol reduces the power consumption, drops the comparable size to range ratio, and has changed from streaming to burst-oriented communications. All of this makes BLE technology perfect for creating a grid of these devices that retailers are discussing using in their brick and mortar locations for 2014.

In June of 2013, Apple released its iBeacon profile as part of the iOS 7 launch. This profile is based upon BLE technology but essentially it makes using it a whole lot more accessible and practical for businesses to incorporate into their mobile ecosystem. One big example of this accessibility comes with iBeacon being able to operate in the background. Compared with the early development of BLE beacon environments where the user walking into a beacon environment had to already have their mobile app running in the foreground, iBeacon can trigger the required app to open. This is kind of a big deal because it increases the number of users who will be in a position to actually engage with the beacon-active environment. A higher volume of users is exactly what the enterprise will need to pull a better return on their mobile ecosystem investment.

Retailers are definitely leading the charge when it comes to deploying iBeacon solutions. This is mostly because the business case for this type of shopper-to-retailer interaction is more immediately obvious compared to the channels retailers use today. For example, in the online space, retailers are able to assemble complex predictive tools which help them to understand what shoppers will want, even before they even know. Purchase history, favorites, product options, traffic patterns, and keyword searches all provide the kind of intelligence that retailers have become comfortable using to target their shoppers with offers and ads.

Simply put, creating an iBeacon environment, enabled by a customer- and sales associate-facing mobile app will bring a lot more of these targeting tools found in the online space into the brick and mortar store. That means that the app user who enters the front door may no longer be an anonymous shopper. Instead, they will be much like the shopper who surfs your site. In this scenario, retailers will have access to the kinds of intel they get online, but with something online can’t yet deliver; instant gratification.

BestFit Mobile has been involved early on in the development of BLE beacon solutions for retailers and has recently authored a white paper that gets into some more specific retailer use cases. You can reach the paper at the button below.

The basic scenario types for what a retailer can do by lighting up a BLE beacon environment includes the following:

Even though retail is showing the best initial promise for business uses for iBeacon, the possibilities across industries are far-reaching. BestFit has developed detailed business use cases for industries including the following: